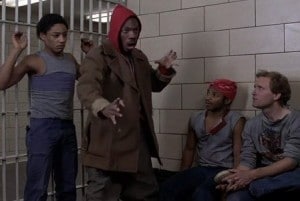 That’s from one of Eddie Murphy’s best movies, Trading Places.

One of the best scenes is when he is in a jail telling his cellmates that he has a chain belt in Kung Fu and Bruce Lee was his teacher.

He’s acting tough to bluff the bigger guys in the cell with him.

You see, many of the dogs that I work with are “karate dogs.” When they are on leash they become very reactive and act like chain belt Kung Fu experts.

They bark, act aggressive and look like they want to fight.

Most of these dogs have no desire to fight but are very good at bluffing. The sad truth is that many of these reactive dogs are harshly punished with a choke or prong collar to try and bring the behavior under control which is like throwing gas on a fire.

Here’s what you need to understand. Dogs, like every creature on the planet, operate with two driving emotions that are rooted in survival.

Once we put a dog on leash the option to flee is no longer available and now if the dog get nervous, afraid or defensive he only has one option – fight.

Now in the presence of another dog or strange person the dog shows all the signs of wanting to fight. Guess what the person holding the leash does?

They take the dog out of the situation……

……..or the strange dog or person moves away.

The dog has just learned an effective strategy to deal with uncertain situations.

And this is where it gets tricky.

Because if the dog is removed from the situation the strategy becomes stronger.

If the dog is “corrected” with an aversive collar the dog becomes convinced that strangers are bad and fight mode was the right course of action.

If the owner gives attention by petting or talking to the dog the behavior is being rewarded.

What’s a dog owner to do?

The bluff has to be called. The dog has to be put in a situation where he is called on his chain belt Kung Fu status.

There is nothing harsh about using this technique.

It helps the dog learn to deal with strange people and dogs in a very calm manner.

I show EXACTLY how it is done on the Leash Walking Secrets Course because it really has to be seen to teach how to do it.