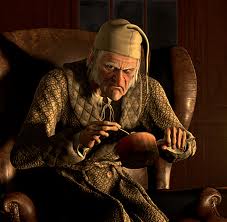 So everyone knows the story of Ebenezer Scrooge from The Christmas Carol.

We all know that before he was visited by the four ghosts he was a mean, cheap, angry man.

I think it is a great story because it reveals why he became what he was. The story shows how his unloving father sent him to boarding school and had never forgiven him for his mother’s death during his birth.

How his fiance dumps him like a bag of coal and marries some other dude. How he focused all of his energy and emotion on money instead of relationships.

I was just working with a little rat terrier mix that had a load of problems and was brought to the shelter. The second family that adopted him was also ready to bring him back.

Dad had no use for the dog as he put it, but mom was much more patient and understanding. The dog had been shipped up north from a southern state and has terrible allergies. Who knows what this little dog has been through,but his behavior is a direct result of many of the experiences he had as a puppy.

There were many underlying reasons for this dog’s behavior but luckily they crossed paths with me because like the Ghost of Christmas Yet to Come, I can optimistically predict that this little guy is going to do well.

You see, he is just a little misunderstood and needs a little guidance to come around. With some training, I can see him becoming a great addition to the family.

And listen when I say this. If you are not getting the training results you want,it is probably NOT your fault. Like most people you have probably spent hours searching the internet for help training your dog.

Which is why I let dog owners check out the Dog Training Inner Circle for just $1.00. No Ebenezer Scrooge here. Just hard hitting, effective, friendly dog training advice to help you.

Here’s where to go NEXT: