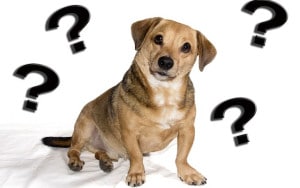 On Saturday I was teaching a class on reactive dogs.

One of the dogs in the class was a very excitable two year old dog.

This dog would lose it when he sees another dog walking down the street.

He does not get aggressive, he just becomes uncontrollable. He gets so crazy that he literally stands on his back paws barking and pulling toward the other dog.

The owner has tried everything. She has worked on attention, tried treats, toys and everything else she has been told to do.

Which is why she was in the class. After watching the dog I let her know that we would have to use a negative consequence.

She was none too pleased to hear this. She said: “I am not going to hurt my dog.”

I calmly informed her that I was not going to hurt her dog. I added that a negative consequence does NOT have to involve pain.

A negative consequence has to be unpleasant but it does not have to inflict pain on the dog.

Then without using a prong, choke or electronic collar I showed her how to get her dog’s attention off the other dog and back on her.

You can see how’s it’s done by going here:

This site uses Akismet to reduce spam. Learn how your comment data is processed.